Today, Life Dynamics, the Texas based organization that produced the film, Maafa 21, documenting that abortion was legalized as an instrument of eugenics and black genocide, responded to dramatic admissions by several former employees of Planned Parenthood and other pro-choice organizations. These employees are publicly saying that they witnessed overt and widespread racism ins...

The Black Lives Who’s Deaths Are Being Ignored By “Black Lives Matter.”

Outrage over the murder of George Floyd is sweeping the nation but, in all the discussion of “Black Lives Matter,” are there black lives who’s deaths are being ignored? In a recent episode of the “Pro-Life America podcast”, hosts Mark Crutcher (producer of Maafa 21 and president of Life Dynamics) and Sarah Waites discuss the […]... 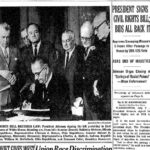 Celebrating the Civil Rights Act of 1964

From The Writer & Director of Maafa 21, Mark Crutcher: Fifty years ago today, the Civil Rights Act was signed into law.   Since then, a lot of progress has been made and, although there is still a long way to go, it is right that we pause to celebrate this achievement. As we do […]...

A new video by Life Dynamics reveals the impact that the atrocities committed by Planned Parenthood and their accomplices have had on the black community.   This video, which shows how abortion has become the number one cause of death in the African-American community, is the second of their new, hard-hitting FastForward video series. The […]...

Jesse Jackson Confronted on His Silence of Black Genocide in America

During the height of the 2016 campaign season, Reverend Jesse Jackson was confronted in the media press room at the vice-presidential debate over his long-time silence on the issue of black genocide. Terry Beatley, founder and president of the Hosea Initiative,  shared with the hosts of the web-show, Life Talk, the question that seemed to […]...

The producers of Maafa 21 have created a new powerful card to spread the word about black genocide in America and to encourage others to watch Maafa 21. Life Dynamics president, Mark Crutcher, created the card in response to multiple requests for another portable hand out presenting the facts about eugenics. Life Dynamics also offers […]...

A new film documents the miraculous angelic encounter that caused a mother to leave an abortion clinic and save the daughter she carried inside her womb. They were broken, their hearts moved on behalf of little ones targeted for death from abortion, that is the sense behind the documentary film called Hear from Heaven. Eyes […]...

51 years ago today, President Lyndon B. Johnson signed the Civil Rights Act of 1964 outlawing racial discrimination in public accommodations such as hotels, theaters, parks, restaurants, and other public places. The Act guaranteed full and equal enjoyment of goods and services and public accommodations without discriminating or segregating on the basis of race, color, […...

Is there a racial motive behind failure to enforce abortion laws?

Black leaders are planning a nationwide event in Selma, Alabama to expose a possible racial motive for not enforcing abortion laws, saying that Black Women Matter. It is called The Selma Project and it was created by Catherine Davis who is the president and founder of The Restoration Project, and is an African American advocate […]...

Black students in North Carolina learn that abortion is killing their race with a provocative “Black Lives Matter” exhibit at a historical black college.   Rev. Johnny Hunter, a past co-host, on Life Talk TV, shared how he and several other African American pro-lifers brought the “Black Lives Matter” project to the campus of Fayetteville […]...

Activists on twitter have joined in on the Starbucks “race together” theme to draw attention to the disproportionate way abortion targets the black race. The campaign website reads, Race Together: Conversation has the Power to Change Hearts and Minds and they weren’t kidding. The coffee store chain says that this marketing scheme will help their […]...

During Black History Month, Dr. Alveda King discussed why abortion is prevalent within the Black community, stating that Planned Parenthood sells it as a means of birth control. According to the most recent report released by the Center for Disease Control, in 2011 almost 56% of all abortions reported for race were done on minority […]...

The son of a eugenics victim once sterilized after his birth has honored his mother with a beautiful gift as a symbol of his love for her. In 2009, Life Dynamics interviewed eugenics sterilization victim, Elaine Riddick, for the documentary film, Maafa21 Black Genocide in 21st Century America. Elaine said that her while her son, […]...

A Must See For Black History Month: Maafa21

During Black History Month in February show the MUST SEE  documentary once featured in the Jubilee Film Festival in Selma, Al. to commemorate the  historic “Bloody Sunday” anniversary of the Bridge Crossing Civil Rights march from Selma to Montgomery. They were stolen from their homes, locked in chains and taken across an ocean. And for […]...

July 10, 2014 FOR IMMEDIATE RELEASE: “The impact of Maafa21 on minority communities has obviously gotten under the skin of the pushers of population control and they are now in damage control mode.” ~ Life Dynamics president Mark Crutcher. Today, Life Dynamics, Inc. a national pro-life organization located in Denton, Texas, has responded to efforts […]...

Originally Published at OneNewsNow.com Written by: Charlie Butts   Subject: Bill Gates Foundation While the Gates Foundation works to reduce Africa’s populations, an expert suggests that money could be better spent in another way. Bill and Melinda Gates recently reemphasized that their foundation does not fund abortion. But their web site points out that they have [&hel...

Life Dynamics, Inc., is pleased to announce that they have distributed between 150,000 and 200,000 copies of the powerful documentary film exposing the true agenda behind legalized abortion, Maafa21.     Maafa is a Swahili word which means “A terrible tragedy” and used to define the time of the middle passage during the slave trade. […]...

Juneteenth the Maafa has not ended with freeing slaves!

50 years of Civil Rights: why ignore racism of abortion?

Today, Life Dynamics, Inc., a national pro-life organization located in Denton, Texas, is celebrating 50 years of Civil Rights in America. July 2, 2014 marks the 50th anniversary of the Civil Rights Act of 1964. As we celebrate this momentous occasion, Mark Crutcher, president of Life Dynamics and producer of the documentary film,Maafa21 Black Genocide […]...

Eugenics no longer a philosophy – Margaret Sanger put it into practice

“… we are paying for and even submitting to the dictates of an ever increasing unceasingly spawning class of human beings who never should have been born at all …” Margaret Sanger, 1922, The Pivot of Civilization. In the early 20th century, the white elitists who made up the eugenics movement were no longer just […]...

Architect of barbaric Nazi experiments had ties to Margaret Sanger

From our documentary film: Maafa21  The Nazis and the American eugenics movement were connected by a German psychiatrist named Ernst Rudin who had ties to Margaret Sanger Rudin was the president of the International Federation of Eugenics in Cold Spring Harbor, New York, which was funded by the Carnegie Corporation and, in 1933, his […]...

I loved all the details that you brought to this documentary and how you backed things up with newspaper articles and books. You make anyone who defends places like Planned Parenthood have a case that is hard to plead. I appreciate what you are doing for me and others in the Black community. In order for us to move forward, we must first know that is going on. Not only are places like Planned Parenthood involved in the madness you discussed in the documentary but they also were accused of some other foul play that I truly hope is false. Thank you again. Now, it's our turn.