Is there a racial motive behind failure to enforce abortion laws?

Black leaders are planning a nationwide event in Selma, Alabama to expose a possible racial motive for not enforcing abortion laws, saying that Black Women Matter.

It is called The Selma Project and it was created by Catherine Davis who is the president and founder of The Restoration Project, and is an African American advocate for women.

Davis said the overall theme of the event is that Black Women Matter and they want to stop Black women from being butchered and maimed in abortion clinics.

Davis suggested that the reason authorities are ignoring laws that regulate abortion clinics is because they are not concerned about many of the women who use the substandard facilities.

She told Life Dynamics that after a pro-life group filed a complaint about an abortion clinic in Selma, the state refused to to enforce the law.

“Why aren’t they enforcing these laws?” Davis said she asked herself.

“And the only common denominator I could see is that the majority of women going into those abortion clinics are black or brown,” she said. 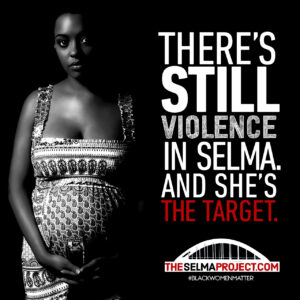 All across America , abortionists have established a pattern of injuring and sometimes killing women in their abortion centers, many times in violation of a number of state civil and criminal laws.

Most of the women injured in these abortion centers that ignore the laws are Black and brown. More Black women are going into these centers alive and fertile and many come out infertile due to substandard medical practices. Some do not come out alive.

Recently, a Black women was left to bleed for hours inside a Planned Parenthood abortion clinic before being transferred to a hospital. The 24-year-old women later died from the botched abortion. Although Planned Parenthood was sued by the family, calls for a criminal investigation by authorities into her death went unheard.

Davis says that the gatekeepers across the country are not doing their job of enforcing laws regarding abortion facilities and she believes the reason is racially motivated.

“I believe that the population control agenda wants to control the birthrate of women of color so they are turning a blind eye to criminal and civil violations at abortion clinics,” Davis stated.

Davis points to Kermit Gosnell and the way the state of Pennsylvania ignored what was occurring inside his House of Horrors abortion clinic.

She says that even though some abortion doctors are Black, it’s just part of Margaret Sanger’s Negro Project which sought to use Blacks to help in her eugenics agenda.

The Selma Project rally has also been sponsored by the National Black Pro-life Coalition, CEC for Life, and The Radiance Foundation.

The group chose Selma to shine a light on what is occurring nationwide.

“Just like Selma and Bloody Sunday are a picture of all that was wrong with Jim Crow in America; our event hopes to shed light on all that is wrong with abortion in America,” Davis points out.

In addition to Davis, speakers at The Selma Project event include Alveda King, niece of Dr. Martin Luther King, Star Parker founder and president of the Center for Urban Renewal and Education, Ryan Bomberger co-founder of The Radiance Foundation which just won a free speech lawsuit against the NAACP, and Dr. Freda Bush an OBGYN from the state of Mississippi.

Fr. Frank Pavone national director of Priests for Life and co-host of the pro-life show, Life Talk TV along with Fr. Terry Gensemer will also speak.

The rally will take place on Juneteenth, (June 19, 2015) and a march across the Pettus Bridge will follow on June 20th.

Davis said that one of the main things on their agenda is to spend a lot of time in prayer on behalf of their community and the nation.

She said speakers will address how the abortion industry is literally getting away with murder and the real civil rights movement of today which she said is to defend the right to life of the unborn child.

What to do? I have seen this a second time because it is such a great documentary and makes you realize that our country is corrupt beyond belief. I bought a few copies to distribute. We MUST reach the masses with this and wake people up! There is only ONE ruler and that is Christ THE KING! Our Country is Heaven. Remember to serve only him and not these worldly powers laid down by the devil. PRAY for people to wake up and turn to God! Mary, our blessed mother, please pray for us!