Life Dynamics, Inc., is pleased to announce that they have distributed between 150,000 and 200,000 copies of the powerful documentary film exposing the true agenda behind legalized abortion, Maafa21.

Maafa is a Swahili word which means “A terrible tragedy” and used to define the time of the middle passage during the slave trade.

The film exposes a plan to create “racial purity” that began 150 years ago and is still being carried out right now.

As one reviewer wrote, “Maafa 21 shows, without exception, how African-Americans are the targets of the social elite. In the film, you will learn that civil rights leaders in the 1960’s gave a clear warning that abortion and population control was a tool of Black Genocide. You will see the links between racism, eugenics, and Planned Parenthood’s effort to market abortion to the African American Community.

“Maafa21 is loaded with historical references from slavery, the Nazi take over of Germany and the Civil Rights movement within the United States, and will educate young and old alike on the causes of Black Genocide in the modern age.”

Shortly after its release by Life Dynamics in 2009, Maafa21  was shown in the Capitol Visitor Center Theater in Washington on two occasions.

In 2010, Maafa21  was selected as the featured film for the  Jubilee Film Festival in Selma, Al. to commemorate the right to vote and remember the historic “Bloody Sunday” anniversary of the Bridge Crossing Civil Rights march from Selma-to-Montgomery. 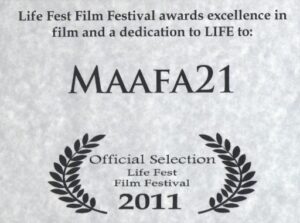 With a mountain of documentation, Maafa 21,  has proven to audiences all across America that the real motivation behind the legalization of abortion was eugenics and racial genocide.

In just over two hours, the documentary shows that the legalization of abortion was part of a campaign that had been created, promoted, and financed by a small cartel of ultra-wealthy elitists.

Most frightening of all, Maafa 21 shows that this effort continues today with massive financial and political backing from a new generation of ultra-wealthy elitists.

Viewers are stunned to learn that it was the American eugenics movement that gave rise to the Nazi effort to create “racial purity” and that this effort was in large measure funded with dollars from American corporations.

They also learn that the first anti-abortion organizations in America were radical civil-rights groups of the 1960s whose leaders had seen that eugenics and black genocide were the driving forces behind the call for legalized abortion.

Viewers learn about the numerous links among America’s number one abortion provider, Planned Parenthood, its founder Margaret Sanger, and the American eugenics movement.

They learn that Sanger gave a speech to a chapter of the Ku Klux Klan and was then invited back to speak to 12 “similar groups,” as she wrote in her autobiography.

Maafa21 viewers will see how Planned Parenthood was an integral part of the sterilization boards that operated in more than 30 states and that Sanger once tried to merge her publication with the American Eugenics Society. 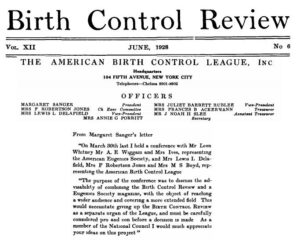 Ironically, within days after the first edition of Maafa 21  was released, U.S Supreme Court Justice Ruth Bader Ginsburg was being interviewed by a reporter for The New York Times and made the following statement when asked about Roe vs. Wade – the decision that legalized abortion: “Frankly, I had thought that at the time Roe was decided, there was concern about population growth and particularly growth in populations that we don’t want to have too many of.”

The revelations go on and on and each one is fully documented.

The reality is that Maafa 21  is a primer on power, corruption and betrayal.

According to Mark Crutcher, president of Life Dynamics, “With Maafa21, we can now link from the days of the late 1700 before slavery ended to today with no gaps in the story. What we show is that abortion today is the continuation of a strategy that began before slavery ended with the anticipation that slavery was going to end and what was going to happen with Black people once slavery was over. The strategies they came up with right then just continued on and when one of them would fail they came up with another until they got to the one that worked, which was abortion.”

Since its release Maafa21  supporters have organized numerous public screenings of the film in  in theaters, churches, college campuses and conventions across the country.

Even though Life Dynamics has distributed hundreds of thousands of copies of the DVD , Maafa21 has been viewed countless times on social media sites like Youtube.

“It is my suspicion that we have had far more people view Maafa21 at public screenings or online for free than have purchased the DVD,” says Crutcher.

Today, Life Dynamics offers Maafa 21  for viewing in HD on their website at https://www.maafa21.com.

While I appreciate the history and have done my own research, I don\'t appreciate the attempt to take the MAAFA and turn it into a pro-life agenda. Your indictments of forced sterilization, eugenics, and even the early mission of Mary Sanger are well documented. However, the logic of the documentary started to unravel when you combined you right to life agenda with the reality that abortion is a choice. Interestingly, you left out W.E.B. Dubois and MLK as supporters of Birth control. Overall, you are using the same tactics you condemn in the documentary by masking your agenda under the guise of Black Genocide.